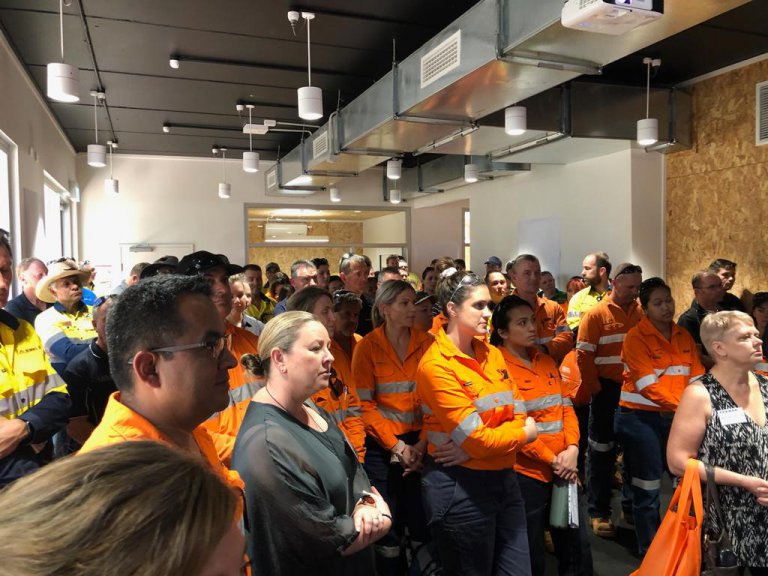 Port Hedland and greater Pilbara region businesses have been given a chance to gain insight and understanding into the current needs of Australia’s biggest business this week.

Delivered throughout Australia in a strategic partnership between BHP and C-Res, a cost-neutral social enterprise, the LBP connects major BHP operations with the regional small businesses within their operational footprint.

The Program has been operating in The Pilbara Region since October 2017. As well as its presence in WA, the Program operates throughout the three other states in which BHP operates – Olympic Dam and Roxby Downs in South Australia, Muswellbrook and the Upper Hunter in New South Wales, and the Bowen Basin in Queensland. This year, the program was also replicated by BHP Minerals America in Chile.

During Tuesday’s networking event, local small businesses – as well as Traditional Owner and Indigenous Businesses linked to the region – were given the opportunity to hear from BHP WAIO Rail General Manager Warren Wellbeloved, Port General Manager Nilson Davila and C-Res Chairman Kylie Porter and better understand how the LBP works and how to get the best from it. Most importantly, BHP Buyers had the opportunity to engage with the local business community and learn more of the capabilities and services that could be utilised.

Mr Wellbeloved said the Local Buying Program was a critical element in BHP’s commitment to supporting the local community and helping to facilitate the growth and development of businesses and organisations throughout the broader Pilbara region.

“At the heart of our communities are those people who take the big step into small business,” Mr Wellbeloved said.

“These are the people who invest in their community – in every sense of the word – and they contribute in a significant way to how we live, work and see our part of the world.

“As a major employer throughout the Pilbara, we have a responsibility to give our communities every opportunity to thrive – and any chance we can get to do this, we will take with both hands.”

Mr Wellbeloved said the event was also a chance to better connect with the region’s Traditional Owners and Indigenous Business suppliers.

“This is an important part of the business and cultural fabric of our region and through the Local Buying Program we are able to better connect with them and that means more opportunities, underpinned by sustainability and the scope for growth.”

“The Local Buying Program is making a real difference to small businesses and their ability to grow their capabilities and their capacity,” Ms Cuttriss-Smith said.

“The Meet the Buyer event is bringing the BHP buyers and supply chain specialists together with local home-grown businesses and it is opening up an incredible amount of possibility.

“C-Res has two business development advisors in the Pilbara region – Mj Van Vuuren in Port Hedland and Georgie McInerney in Newman. Both of them have seen, first-hand, how the region has developed in the past two years and the part the LBP is playing to foster that development.

“That’s what is so important about the Program. We are working towards making a real difference to these businesses and that, in turn, is good for the communities.

“And when you bring that all together, it is a potent mix – and the potential benefits, for everyone, are very exciting”.